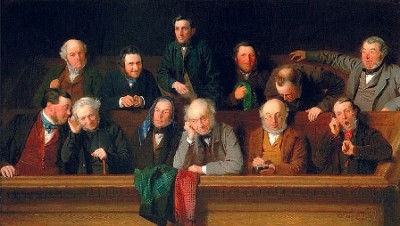 Originally Published in the Daily News

What do Michael Jackson, Vice President Joe Biden, NBA all-star LeBron James, and many of you have in common? Each has responded to the call to serve as a juror.

In recent years increasingly large numbers of citizens fail to respond to the invitation to exercise one of their most critical duties – jury service. At a time when most of us are far removed from the Constitution, serving as a juror is an opportunity to re-connect with our Constitution and its noble principles.

Prior to the founding of our country, the British Parliament denied Colonists the right to a trial by jury. A judge alone decided guilt or innocence, and upon a guilty finding, would receive a portion of the fine assessed. To the Colonists, the actions of the British threatened their liberty, justifying separation from their mother country and creation of a government that would zealously protect the right to trial by jury.

Shortly before the War for Independence, John Adams stated, “Representative government and trial by jury are the heart and lungs of liberty. Without them we have no other fortification against being ridden like horses, fleeced like sheep, worked like cattle and fed and clothed like swine and hounds.”

The Preamble to the Constitution calls upon each of us to directly participate in our governance by serving on a jury. Twelve ordinary citizens apply the “We the People” principle by “establishing justice,” “insur[ing] domestic tranquility,” “promot[ing] the general welfare,” and “secur[ing] the blessings of liberty.” In a very real sense, twelve women and men directly govern by checking and balancing government power, protecting citizens, maintaining law and order, and insuring justice for the accused. During past presidential elections, many complain their vote doesn’t count. Imagine, however, the significance of one vote in a criminal prosecution where unanimity is required to render a verdict. On jury duty, your vote counts.

The Founders carefully crafted the right to a jury trial as the supreme law of the land (Article III: “Trials of all crimes … shall be by jury”; Sixth Amendment: “In all criminal prosecutions, the accused shall enjoy the right to a speedy and public trial, by an impartial jury”). The Washington State Constitution emphatically declares “the right of trial by jury shall remain inviolate.” The aim of both Constitutions dovetails with Thomas Jefferson’s statement that “trial by jury [is] the only anchor yet imagined by man, which a government can be held to the principles of its constitution.”

Fast forward to today and the receipt of a jury summons in the mail - you are busy with work, children, family, church, and friends. Serving will be a sacrifice and require accommodation.

However, while serving as a juror, you will be transformed into a constitutional actor. You will be asked to become personally acquainted with community happenings that are intimately personal, terrifying, and oft times sensational. You may be asked to consider bloody images, excruciating facts, and heart-wrenching testimony. In some cases, jurors are asked to decide whether a person lives or dies. It is jurors, everyday citizens, who hold the responsibility to protect individual rights and promote the common good.

Moreover, jury service teaches skills required for democratic self-government: voting between contested facts; debating issues framed by contesting parties; listening; tolerating dissenting views; and expressing personal opinions. Sitting in a room with eleven “strangers” leads to an expansion of the normal circle of contacts and possibly new friendships. The judge asks all jurors to follow rules and law in making decisions. As an officer of the court, jurors exercise judicial power by applying the facts they decide to the law given by the judge. Jurors govern directly and uphold shared values – protection of life, liberty, and the pursuit of happiness.

Jury service is critically important. The success of the judicial process depends on you – members of the public. In a time of increasing civic ambivalence, jury service is a stunning privilege.

The judges of Cowlitz County are grateful for all who willingly respond to jury summons and serve as jurors.
Thank you!

Judge Michael Evans graduated from Brigham Young University in 1995 and from Seattle University School of Law in 2001. Judge Evans served as a deputy prosecuting attorney for Cowlitz County in both criminal and civil matters and practiced privately in criminal defense, family law, and civil litigation. As District Court judge, with the support of many community members, he created and ran Cowlitz County's first mental health court. Judge Evans also serves  as a member of the Supreme Court's Gender and Justice Commission, as well as the Chair of the Ethics Committee of the Superior Court Judges Association. Judge Evans is currently the Court's Presiding Judge.

By accepting you will be accessing a service provided by a third-party external to https://www.cowlitzsuperiorcourt.us/

Latest News "From the Bench"